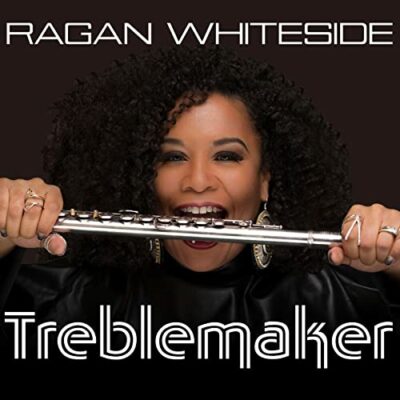 It takes skill, creativity, sheer musical ability, and a charismatic presence to electrify the music scene. And that’s just what flautist Ragan Whiteside has done in the world of instrumental soul within a few short years. The Atlanta-based musician, songwriter, and vocalist has consistently delighted fans and critics alike with her unique brand of engaging upbeat melodies and exhilarating flute playing. Tunes like the May 2021 single release “Off The Cuff,” as well as “JJ’s Strut,” “Reminiscing,” “Jam It,” “Early Arrival,” “See You At The Get Down,” and the Billboard No. 1 “Corey’s Bop,” have burnished her reputation. What’s more, Whiteside has become one of few women players to excel in the male-dominated instrumental sphere, garnering six consecutive Top Ten Billboard airplay singles by 2021. And she’s done it as an independent, releasing projects on Randis Music, the label she founded with her husband, producer, and composer Dennis Johnson.

Whiteside gained her musical acumen by training as a classical flautist. Originally from Mt. Vernon, New York, Whiteside got her first taste of music in elementary school, playing drums, piano, and violin before a desire to be in the marching band put the flute in her hand at age 8.  “I did not want to play the flute. And it took me about a week to get a sound out of it,” she says. But once young Ragan locked onto the instrument, she got good and got serious.

​Listen for this track currently in rotation: wordpress-852544-2941526.cloudwaysapps.com